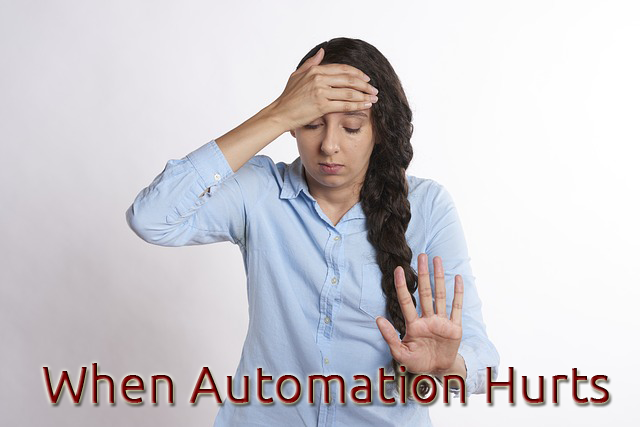 Automation could be a good thing for a company, but transparent cost cutting that frustrates your customers may backfire.

Ray Zinn explores the value and risks of automation in this edition of the Tough Things First podcast.

Rob Artigo: Rob Artigo here once again, your guest host for another edition of the Tough Things First podcast. I’m a writer and a researcher, an investigator in California. Being invited back always a pleasure. Ray, how are you doing?

Ray Zinn: Good, Rob, it’s always good to have you on. You’ve got a good way of leading these podcasts, and so you’ve got a real talent for it. Appreciate having you back on the program again.

Rob Artigo: Thanks a lot, Ray, and obviously it’s great to be able to pick your brain on a lot of these matters. I find it fascinating, and when I listen to the other podcasts that are done by the guest hosts, I always learn something, so I appreciate it.

Ray, you’re not only known as a well-respected very successful entrepreneur, but you’re also an inventor and innovator. You came up with the wafer stepper, which changed Silicon manufacturing. Let’s talk about those kinds of advances in the context of businesses choosing new automation platforms, and maybe doing away with older methods. And I hate to say going from a buggy whip to automobile or something like that, but every new year, and it’s about that time to start thinking about it, every new year seems to bring advances in automation technology. So, what does it mean for businesses to consider automation when you have a lot of options but it can be costly?

Ray Zinn: Automation does two things. Number one, it increases product quality, or should increase product quality and consistency. And it also, of course, allows us to go beyond where we were before. I know that when I invented the Waver Stepper it allowed us to go to really deep geometries. Very, very small chip sizes, as well as features. So, it really improved performance dramatically and continues to do so.

So, there’s all kinds of automation. There’s what they call AI automation, which is artificial intelligence, which allows cars to be self-driven without having a passenger or a person behind the wheel manipulating the controls. And so there’s the issue about, well, what’s that going to do to safety? Maybe a person is more alert and can see things that maybe not all the little sensors in the car will know. And in fact we’ve known that there’s some people that have been killed when they went to these self-driving cars.

So, there’s that aspect of it. The better the automation is in the way of not only improving safety, but improving quality and reliability, is good. But if it’s just there to cut costs, that’s not always a good thing.

Rob Artigo: And the cutting the costs is one of the reasons why some businesses have chosen to go with almost an automated customer service. And you mentioned artificial intelligence, and one of the aspects of artificial intelligence, or the early stages of it, is you have a video screen or something with an automated person on there, automated image of a person on there. And then you’re interacting or talking to that, and then punching in numbers. And you’re not really interacting, engaging, with a real person.

I suppose that when you deal with the type of business that it has always been traditionally a human interaction between your business and the customer, that an overstep in automation could push you into a zone where you really end up losing that relationship that you’ve always wanted to have with your customers.

Ray Zinn: Like you, I’m probably bombarded with 50 to 60% of my phone calls are all automated, meaning they’re just dialing my number and then it does a pause while they then connect me with a person, or it’s just a recording. Those are very irritating, and so to me, I won’t deal with companies that use that sort of contact, when it’s fully automated. And you know how irritating it is by the way when you call a service and you’ve got to punch five different numbers in before you get a real person to talk to you.

Rob Artigo: I had a recent experience, as you were just saying there, I have a couple of power poles on my property. And I had to call the local municipal utility to tell them that a guy wire that was holding one of the poles up had snapped off out of the ground. And I don’t think there was any immediate danger, there were other guy wires holding the pole. But obviously they want to know structurally if the system is sound and everything is working on. And I had to call and tell them that there was a broken guy wire, and navigating the voice system to get to the right person ultimately was, I said, “Problem with a power pole,” and they sent me to emergency line because it was a down wire thing. And I had to say, “Well no … it’s not.”

If they had listened to my suggestion, it would’ve been, “Take me to somebody who can schedule a person to come out here and look at this in their appropriate time.” But it wasn’t an emergency. Ultimately, my relationship with that municipal utility is unaffected, because I need them. They’re going to be here no matter what, I don’t have a choice with the utility.

But, I also have a negative opinion now of having to deal with them, because it was so impossible to deal with navigating their phone. Their voice phone interactions, and that’s one of the examples that when you have a business that deals with the public, and you force them to go through all the automation, you stand the risk of really losing your reputation as being a customer service-oriented organization.

It must be a tough decision for a business operator to decide when to make that move.

Ray Zinn: Yes, and you know, they primarily do it because of cost. In other words, they’re just trying to reduce head count, and so they’ll use as much automation as you can to cut the cost. I remember recently with an internet problem, it took me forever and I was on hold forever before I could talk to a person. And I said, “What’s the problem here with your service?” And they said, “Well, I’m one person, and I’m now the only human interface for the entire company.” And this is a company that has tens of thousands of customers.

Most of the car manufacturers now, a whole lot of it is done automatically, there’s not a person that interfaces with that car, except maybe in the final inspection. Maybe even then, it’s done by automation. So, there are areas where automation has basically taken over the entire manufacturing of a product. But it’s the automation where it’s interfaced with customer service, is where I think we have the most difficult, because we know the company is just trying to cut costs, and they’re really not here to help service their customers.

Ray Zinn: Appreciate being with you, Rob.

Rob Artigo: You can join the conversation at thoughthingsfirst.com. You can ask your questions, you can put your comments in there. They’re always welcome. Ray loves to hear from you, you can follow Ray Zinn on Twitter, Facebook, and LinkedIn. And of course, get the text of Ray’s books. He has two, Tough Things First, and of course, the Zen of Zinn. Thanks Ray.