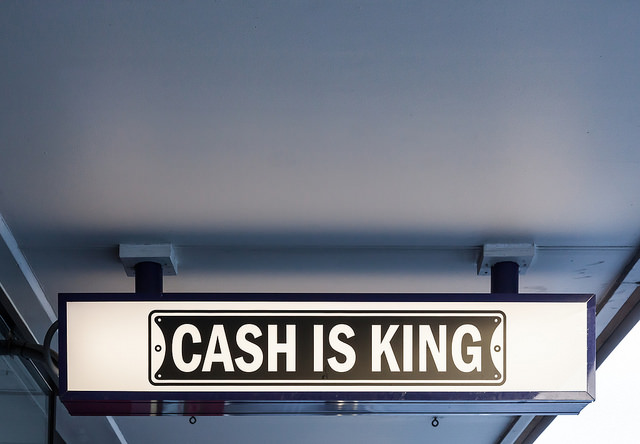 In business money is like air … without it you die. But borrowing might not be the best strategy. In this edition of Tough Things First, Ray Zinn and guest host Rob Artigo explore why cash is king.

Ray Zinn: How you doing there, Rob? So good to be with you today.

Rob Artigo: Well, at the conclusion of this segment, Ray, we’ll tell everyone how they can reach you and if they have any questions, or if they want to look for some links on important information about Tough Things First, we’ll do that at the end of the podcast.

Rob Artigo: Cash is king. It’s one of your mottos. It’s as true, I think, today as it is yesterday many years ago. Your mother probably told you the same thing my mother told me, which is, “Money doesn’t grow on trees.”

Rob Artigo: Did that pay off for you in business, for example, running Micrel for 37 years?

Ray Zinn: Absolutely. She would remind me to make sure that when I left my room, I turned the light off. Also, that I didn’t waste water. She was always very frugal with regard to how we ran our household. I was the oldest of 11 children and so I learned at a very early age the importance of money and making sure that I didn’t squander the resources that I had. It’s just been very important to me throughout my entire career to guard my cash as though it were my life.

Rob Artigo: If you run out of cash, Ray, as a business owner, obviously I mean, everybody talks about this term, “Burn rate.” Let’s just talk about just simply the idea that you’re starting your business and you really need to have enough cash to keep running all the way through to profitability, correct?

Rob Artigo: Give me a strategy perhaps on how I can do that, effectively do that in a business environment.

Ray Zinn: As I mentioned before, it’s important to have enough cash to take you to profitability. This prohibits the need to have to continually going out and raising money. Whether you borrow it, or whether you raise equity through various seed rounds, you still have to have enough cash to start. If you don’t have enough cash to start, then don’t start. It kind of reminds me of taking off on a trip, and knowing that you have a certain distance to go, and then you don’t put enough fuel in your tank to get you there. You’re hoping that there’s going to be enough service stations, or gas stations along the way that you can keep topping your car off, but that’s not smart.

I can remember years ago when I would travel from my hometown in southern California, to my school in Provo Utah, that it was 760 miles and I had to cross a huge desert. I made sure I had enough fuel to get me at least through the desert where there were no service stations or gas stations, so that I could not run out of fuel and then be in trouble, have to either call for a tow truck, or have some other way of fueling up my vehicle. It’s important to have enough gas to get you from point A to point B. I’m afraid that many businesses don’t do it. They raise enough cash to at least get themselves started, but they can’t keep themselves running. You understand the difference?

Rob Artigo: Sure. I think of just me in my personal finances at home, the idea that I don’t really want to pay interest to anybody, because that money that’s going out should be coming in. I should be … My money saved, should be generating interest and cash for me, not the other way around. It’s just a natural instinct for me and a great way to set up your finances. I don’t want to pay interest, and if I’m a business owner, there are a lot of pitfalls in borrowing, right?

Ray Zinn: Whether you raise money through equity, or borrow with a loan, there’s still interest. I mean, the investor when he puts money into fund your company, even though it’s equity, he is expecting a return. Whether your return is a monthly interest payment, or like you do on your home, or your car, or whether you have some term on the equity that, the money that’s been put up in your company, you’re still going to have to pay for that. Money is not free, whether you borrow it, or whether you raise it through venture capital. You need to remember that. The only difference is, of course, if you borrow through equity, then there’s no monthly payment either on the principal or the interest. There will be at some point, that person who gave you that money is going to expect a return, whether it be interest or whether it be through some kind of a sale, or other equity financing.

Rob Artigo: Well, they’ll be … Often times, this will be delineated in a contract, right? It’ll say, “Before you do anything, I want this.”

Ray Zinn: Yeah, it depends upon if you’re preferred or not. Depends upon the kind of financing that you received. There are no free lunches. I mean, whether you’re borrowing the money, like you do on your home, or whether you go out and get financing through equity, there’s still a return expected.

Rob Artigo: What’s the advantage of having the cash on hand to carry you through, and how long do you need to plan out having that cash?

Ray Zinn: Well I mean, if you don’t have the cash, you can’t run your business, so cash is like air. You can’t breathe without air. That’s your lifeblood. You should have enough money to take you to profitability, whether that’s one money, or whether that’s two or three years. You still have to have sufficient cash. Now, what you can do is pretend like you’re a scuba diver and you have an hours worth of air in your tank, you can stay submerged for an hour, but then you’re going to have to come up for air. You can’t stay down forever. You could do what we call, “Scuba diving financing,” and that’s what a lot of companies do, is they just get enough money to keep them down for an hour or so, as you would, and then they’re having to go refill their tank.

That’s a constant thing. You’re constantly having to come up and refill, constantly come up and refill. The danger with that is, is that of course, they may not want to refill your tank and then you die, or you can’t go back down. You can’t submerge again. Again, it’s a matter of how long you want to stay submerged and what’s your objective for your company. My view is, or my recommendation is that you have at least two years worth of cash so that you can run your company for two years without having to refill your tank.

Rob Artigo: I have … Another one of my home philosophies for finances is, I have a certain amount of cash just sitting aside. It’s for an emergency fund. It’s only there if something were to happen where all of a sudden cash vanished. I mean, the income vanished and I needed to keep the lights on and provide food. Those are the two emergency items that I would pay for out of that fund. That’s it. I think of in running business, what you’ve just described here, is having the cash on hand to run your business in the worst case scenario for two years, because two years should be enough time to weather that storm.

Ray Zinn: Most financial people will tell you that you should be saving each month. In other words, you should be putting some money away. Same thing on running a business. If you think you’re going to need X number of dollars, then you should have X plus 10% or 15% of that, so that you have a little reserve in case something bad happens you have something to cover you until you can get back on track. When I say, “Raise enough money to last you two years,” I’m saying that even if your plan calls for X number of dollars, that you should have X plus %10 or X plus 15% just to act as a reserve in the event of some problem. Problems will happen and you’ll be happy you had that reserve.

Ray Zinn: Yeah, you run out of cash, you run out of air, and you stop breathing, and you die. If you don’t want to die, keep enough air in your tank that you can stay submerged for however long it takes you to accomplish your goal.

Rob Artigo: If you want to find out more about the Tough Things First book, or any other information, you can go to ToughThingsFirst.com, Tough Things First on Facebook. Also, again the book is available at major retailers and of course Amazon.com. Thanks, Ray.

Ray Zinn: Thanks, Rob. Good talking to you again.