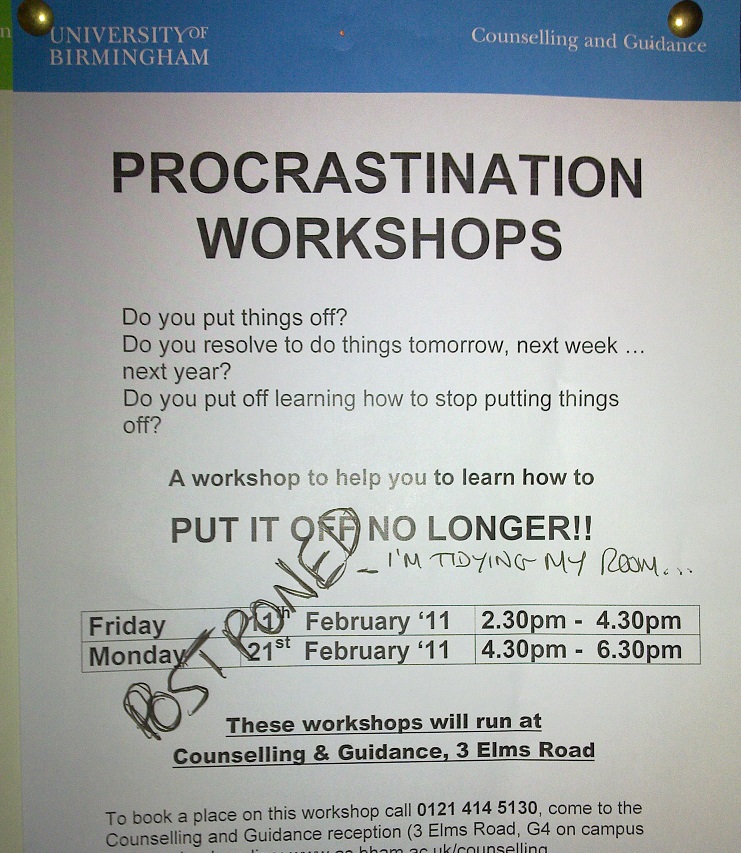 I saw Warren Muller, my co-founder at Micrel, pulling an oil tray from under his automobile and pouring the oil back into the car’s motor. He had been doing this for quite some time because he felt that taking his car into the repair shop was too much trouble. While Warren was busy changing the very nature of the semiconductor industry, saving his car engine from inevitable self-destruction was a low priority.

That was until the day his car died on the way across town. Then his priorities changed.

People are animals, and as such we are preprogrammed to conserve effort and avoid pain. The trade-off between pleasure and pain is the essence of procrastination. We avoid, for as long as possible, doing painful, unpleasant and boring things. The tougher the task, the more likely any normal person is to put it off.

Entrepreneurs are normal people, albeit with drive and purpose. They have a vision for what they want to do. They are good at finding the resources needed to reach goals, and thoroughly examining the alternatives. Because they are motivated by accomplishment, boring details and tiresome tasks that do not rapidly advance their vision are the things with which entrepreneurs tend to procrastinate. Many startups have left their policy and procedure (P&P) manuals unwritten until a disaster occurs because writing P&Ps is dull, dull, dull work. When I founded Micrel, I borrowed the P&P manual from another company, editing and adding as needed in order to not procrastinate and yet not suffer the monotony of the task.

It is the avoidance of pain that causes people to falsely prioritize. Prioritization is organizing tasks in their proper order. Since “procrastination” is an ugly word, no one wants to admit when they are doing it. Instead they will say: “I am not procrastinating, I am just prioritizing.”

Throughout modern history, prioritizing has been an elaborate means of procrastinating. A marketing strategist whom I know admits to processing all his email in the morning, including unimportant items, because he is delaying the real work that has been waiting for him—an intentional delay of game on his part until he finishes a second cup of coffee.

People also procrastinate because they either don’t understand or don’t want to understand something, or they simply want to avoid pain and tedium. Sometimes they risk disaster for the sake of poor priorities and simplified living. Early in Micrel’s history, I got a phone call from the bank of one of our employees. This employee was constantly overdrawing her checking account; the bank was ready to damage her credit rating and close her account, and was hoping I could chat with her. She surprised me by saying she did this on purpose. By zeroing-out her account, she was effectively reconciling the account and giving herself pre-programmed spending limits. She hated the idea of filling in the form that arrived with every bank statement and attempting to assure her books were balanced.

Entrepreneurs do not have the luxury of procrastination. Any delay risks having their company and their vision left behind as markets and competitors move steadily forward. Overcoming the procrastination habit we all are born with is an essential first step for entrepreneurs. Overcoming the pain of unpleasant and boring tasks is part of growing from adversity. After all, adversity is merely the fertilizer that helps us grow.

Here are the four key steps entrepreneurs can take to crush procrastination:

See big things as exciting challenges: An entrepreneur’s products and market visions are complex. Entrepreneurs are more than willing to tackle global issues, yet they shirk solving smaller, boring tasks. Instead you should view these as different challenges—projects around which you must wrap their minds. Seeing it as a challenge changes an unwelcomed task into a fun, new project.

Unleash your natural curiosity: Entrepreneurs are curiosity-fueled. The minutiae of bookkeeping could bore you, but you could instead decide to be curious about it. If a task seems unpleasant, rediscover the joy of discovery. Allow your curiosity to go two steps beyond where boredom seems overwhelming, and you will start to crave the details.

Break down the big things into little things, delegating small things when it makes sense: Most procrastination occurs when a task looks too big. Big tasks are typically a bunch of related small tasks. Break down projects and delegate some of the smaller tasks to qualified individuals. Bite-sized projects, if managed and recombined, make the big jobs easy.

Understand how the big things bring the big result of obtaining your vision: Entrepreneurs have goals. Yet any time they procrastinate, the goals become more unobtainable. Use the specter of failure to change the priority of unpleasant tasks. Once you see them as essential steps to obtaining your vision, you will instantly reprioritize them.

Mark Twain once joked, “Never put off until tomorrow what you can do the day after tomorrow.” Yet he wrote volume upon volume of the most important literature in print. He had multiple visions and turned each into a book. He did not procrastinate, and neither should you.