The Great Resignation. Is America’s workforce slump here to stay? 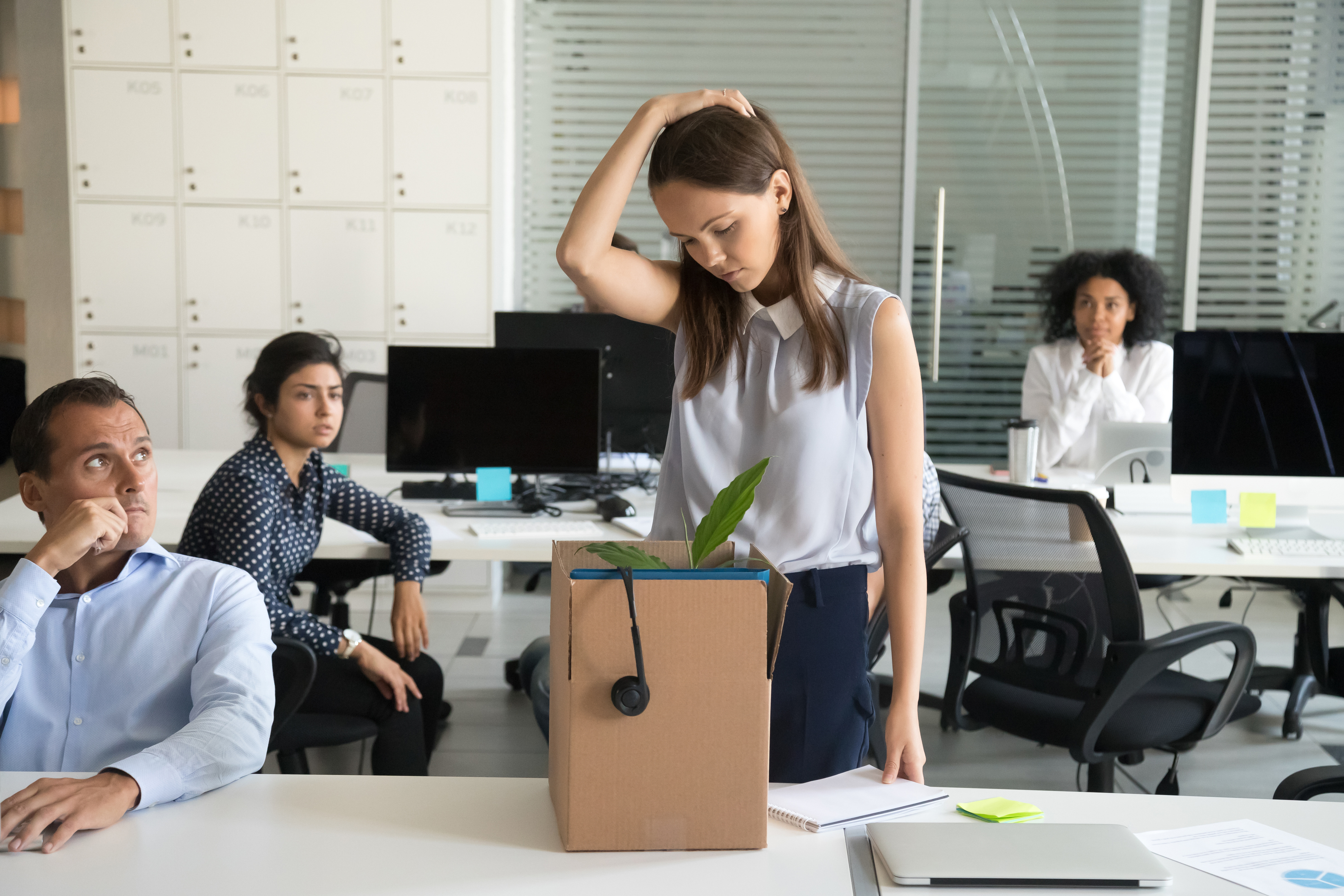 One headline read: “…the Great Resignation may be followed by the Great Regret.” But how long will that take?

In this edition of the Tough Things First podcast with legendary Silicon Valley CEO Ray Zinn, Ray is joined by his long-time friend and former Micron CFO Robert Barker, to mull over the state of the Great Resignation and its fallout.

Ray Zinn: Welcome to another wonderful and fantastic Tough Things First podcast. This is Ray Zinn. I’m the CEO of Micrel and also Tough Things First, and I’m so delighted to be able to have this podcast once again with my good friend and employee, Robert Barker. Robert was my CFO Vice-President of Business Development and Human Resources for many years. And so I’m just delighted to have Robert back on my program today. Hello, Robert.

Ray Zinn: So, let’s talk about this supposed big subject of the Great Resignation. Have you ever heard of that?

Robert Barker: I have heard of that.

Ray Zinn: What’s your thinking about the Great Resignation?

Ray Zinn: And they moved. They’ve moved all over this country. Some states have gained population. Other states have lost population. So I’m a philanthropist at a hospital here, a local hospital, and they’ve asked me to help them in hiring and retaining employees. So I’m saying, “Okay, fine. I’ll be willing to do that.” And so I provided a big pool of money that they could use to hire and retain people, and I thought it’d be nurses and doctors and highly-paid technicians and so forth. But I found out it was really the cafeteria workers. It was the people that take food from the cafeteria up to your bed.

So here I am. I’m paying big bonuses to get people to carry food upstairs or wherever to a hospital room. And I said, “What’s going on here? I didn’t think that you would be using my funds for this.” And they said, “Oh, listen, these are the hardest people we’re having to hire right now because we’re competing with all the restaurants.” And I have noticed that all the restaurants are down to two or three days a week because they can’t find people. So we’re all competing for the same people.

And if you remember, Biden says, “Pay them more money.” So that’s part of the problem is that these people are on unemployment, and they’re getting good benefits on unemployment, and they just don’t want to work. They don’t have to pay for any babysitting or any childcare because they’re at home taking care of their own children, and it’s changing things. I’m not sure we’re ever going to get back. Is this the new normal, Robert?

Robert Barker: Well, I think it is. And also though, I think that it’s the older people that are out of here, and they have created a void at the top of whatever area you’re talking about. So the head of the cafeteria at that hospital probably quit, and they have to move these people, and so people are moving up. And so these people that used to take the trays now can move up to something a little higher, and so they need to feed from the bottom. That’s a theory of mine about that.

And it’s surprising to me, and I don’t know exactly why, but a lot of the people that I work with at Micrel, if you look at it, most of them are retired. And people ask me, “Why aren’t you retired?” And I’m excited to get up every day, and I think I learned that from you, Ray. You’re a person that’s excited to get up and that has a plan, that’s got stuff to do. And now you’re going to make mistakes, but it’s going to be fun.

Ray Zinn: Well, what’s happening is that the hospital told me they’re having to use nurses and technicians now to take the food to the room, and that’s costing them a lot more money because these are highly paid people. And so here I am paying bonuses to hire restaurant workers to come to work at the hospital. And so I think, Robert, this is maybe a new norm where the lower-paid people, and this is where we’re having the difficulty hiring people, because I know a lot of owners of stores that are having difficulty hiring people to work the cash register or to hang clothes on racks and to unload trucks and stuff. And so it’s the problem with the lower-paid people. That’s the ones we’re having difficulty finding.

Robert Barker: When I think back to myself, now I started working when I was in the fourth grade. I had a paper route. I didn’t get paid a lot, but it was enough money for me. And then when I went to college, I think I figured out I had 12 or 13 different jobs. I was in college for a long time. And so high school and college kids, they don’t work anymore.

Robert Barker: But they could deliver those trays in the hospital, and they should because they’ll get money for it [crosstalk]-

Ray Zinn: Well, these student loans are the problem.

Ray Zinn: But I think, again, from my experience so far, it’s been the lower-paid people are the ones that we’re having a hard time finding people to do, to fill up those jobs washing dishes and preparing food and serving food. Those are the people we’re having a difficult time finding, people to hang clothes on racks and to unload trucks and stuff. And without them, we’re done. There’s no way to move things without these people. These people are the movers and the shakers.

Robert Barker: I was listening to a radio program, and it was about restaurants. And the person asked the question, “What person of the staff when that person doesn’t show up, what is the most valuable person in the whole restaurant?” And the answer was the dishwasher. Without the dishwasher, when they don’t show up, it messes up everything. Everything gets messed up. They said, “The head chef can be gone for a day.” They can cover for him, but not the dishwasher.

Ray Zinn: No. Well, again, I know you’re talking about the older people, but the Great Resignation is the people that don’t want to come back to work, the people that they’re either on unemployment and they’re able to stay at home and take care of their kids, save that money for childcare. It may be the people who are moving up the ladder, as you said, because people are retiring. But this Great Resignation is real, and it is impacting our country. And by the way, it is one of the drivers of inflation, Robert.

Robert Barker: Oh yeah. Oh, I’m sure of that, yeah. And every place you look right now, there’s problems. One of the people that I work with, he just bought a house, and he bought a stove. And the stove was supposed to be there in March, and now they’ve told him the stove won’t be there until July.

Ray Zinn: I know, Robert. It’s just like used cars. Look at the cost of used cars. But I know that at the hospital, we’ve had to pay people 30% more to get them to come to work in the cafeteria, 30%.

Ray Zinn: The government makes out because look at the taxes they get to pull off of that. And so they’re all for it. The government’s all for paying lower-paid workers more money-

Ray Zinn: Because there’s a tax base that they’re relying on.

Ray Zinn: Well, it’s just going to cost. To have that staff go up 30% is really hurting these companies, and I’m very well aware of it because I’m involved with a bunch of them. So again, this Great Resignation is a real problem. People are moving all over the country and changing jobs, changing fields. People are finding out, hey, I want to work from home. Well, if you’re working from home, you’re not going to work in a restaurant. So they want to find a job where they can work from home, and that’s what they’re doing. And they’re stealing from those poor guys that have to go to work, have to actually be in a location like a restaurant or a retail store.

Robert Barker: I also heard that at one point, TSMC lost 20% of their workers. That’s one of the reasons that they-

Ray Zinn: Yeah, yeah. I’ve heard that all over the far east because they had to cut back on how many shifts they had, how far each worker could be from each other. And this pandemic has caused a mess. No question about it.

Ray Zinn: Thank you, Robert, for taking your time just to spend with me on this subject of the Great Resignation.

Robert Barker: Okay. It was my pleasure, Ray.

Ray Zinn: Join us again for a Tough Things First podcast. We would love to have you visit with us again. Read my book, Tough Things First. You can learn a lot about how to run a business profitably. You can find it in your local book retailer or Amazon. And also my new books, Zen of Zinn and Zen of Zinn 2. Soon to come out, Zen of Zinn 3. Thank you, Robert. We look forward to having you again as a guest.