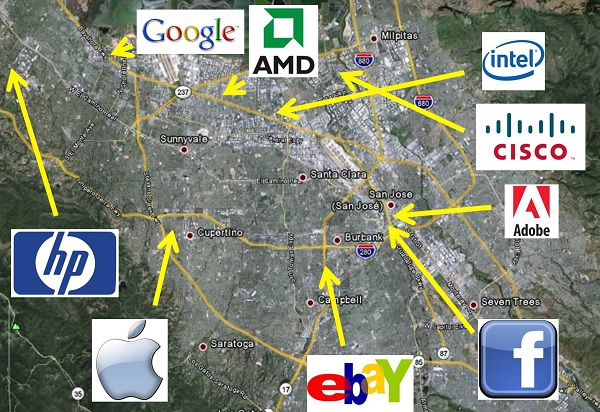 Silicon Valley’s aura is unique. Try though they might, other localities have yet to replicate it and might never do so. Yet many of these same factors can be part of any singular company, or a localized industry.

In The Valley, we thrive on doing, and every vector of activity is based on doing things big. Nobody in the Silicon Valley technology world dreams of starting anything less than a global business. A good starting point for us is a million customers or users. Changing the world is considered the norm. In a word, Silicon Valley’s culture is geared to the exceptional.

Everyone is led by their biases, and in Silicon Valley, biases abound. What underlies the Silicon Valley mystique is a collection of well-integrated biases toward action.

Bias for disruption: Small, incremental changes are fine, but Silicon Valley prefers wholesale change. This is reflected in our entrepreneurs, our daily language, and our venture capital choices. The phrase status quo is only used negatively in Silicon Valley.

Bias for flying fast: Though I prefer investing in entrepreneurs seeking to create enduring companies, Silicon Valley prefers starting fast, ramping up faster, and selling out once the product concept is proven. This attracts venture capitalist who also have short horizons.

Bias for brains, not egos: In Silicon Valley, the best idea wins. This generates an egalitarian environment largely free of egos. Pride is replaced with participation, collaboration, and a constant focus on the end-game.

Bias for bucks: Capitalism is a good word in Silicon Valley. This creates associated biases for acquiring capital to disrupt technology and life as we know it. Taking investment money, making money, and then giving away our billions are considered saintly, not evil.

Cultures migrate, but are rarely exported

Herein is why no other city has yet replicated the Silicon Valley mystique, though a few companies have done so internally.

What drives us is mainly cultural. Our local culture has self-assembled over the last 60 years. Our collective biases for risk taking, coopetition and disruption are interwoven into our people. What we think, whom we dine with, what risks we consider worth taking, even our local language evolved to support our biases for disruptively changing the world. It is an integrated culture, and like most cultures, it does not travel well.

Think about regional cultures in the United States. The warm hospitality of the Old South cannot be found above the Mason-Dixon line. Nor can the overly tolerant ethos of San Francisco be found in The Middle. Cultures can migrate, but it is a slow and sloppy march in the best of circumstances.

But it is possible to accelerate cultural shifts on smaller scales, which over time causes the culture to spread locally. Individual businesses can and have become miniature Silicon Valleys.  Executives therein foment culture of risk taking, meritocracy and education. They tinker with intrapreneurism (fostering entrepreneurs within the company) and celebrate their failures when valuable lessons are learned.

Often such companies, regardless of how modest in size they may be, cross-pollinate with other companies in the same city, or within the same industry. Cultures of change and success tend to be admired, and then mimicked. What is obvious here is that no government program nor local civic initiative will ignite the required cultural changes. That takes a business leader with guts.

Silicon Valley’s integrated culture may be less likely to find roots elsewhere, but it is not an impossibility. One aspect or another may be adopted in Austin, Portland or the Research Triangle, but the entire set of biases and the support systems that feed them likely will not find new homes as a unit in an instant. But one company can incorporate most, if not all, of these Silicon Valley biases – disruption, speed, meritocracy, global perspective, ardent capitalism. Like any great new product, it takes that  first buyer before word spreads and it becomes a household item.

Is your company that first mover in your city? If not, then Silicon Valley’s mystique will remain unique.