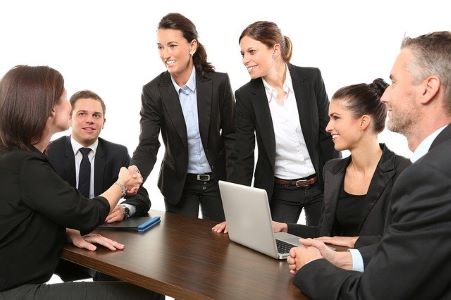 Many leaders don’t see the connection between happiness and corporate innovation. Well, at least until everyone is unhappy and nobody is doing anything worthwhile.

People are at their most creative when they are happy. This doesn’t mean you have to throw a party every day at the office. But it does mean you have to create an environment where the net team happiness leads to net team inventiveness.

People cannot be happy when surrounded by dreadful life forces, negativity, or abuse. Humans are animals geared to be on the defensive. It is a survival mechanism. Thus, when the work environment has negative aspects to it, people operate in a defensive mode and any innovation they create may be only in term of basic survival and retribution. “Stab in the back” corporate cultures rarely go far.

Part of the problem with negativity is that it is distracting as heck. If you are at a podium during a debate, rattle your opponent. Anything that keeps them from focusing on the topics and their talking points will weaken their presentation. The same happens to your teams when they are not at peace with themselves, their prospects, and especially their teammates.

Here is a key clue for you leaders. No amount of effort accentuating the positives for a team will overcome a stack of negatives. If a team is weighed down by worry and doubt, they can never fully realize the free-thinking and open camaraderie required to be innovative. Your first job, then, is to reduce the drag on your organization and weed-out the negatives.

But like cattle peacefully grazing, mere lack of negatives won’t produce innovation. It is just as likely to produce lethargy. To create momentum, you need not only a mission but excitement, fun and reward for working on that mission. Employees will work toward a mission without much more than a paycheck, but their commitment to the mission will be weak at best. But put excitement and joy into the mix and brain cells start to open up.

These two factors alone – eliminating the negative, accentuating the positive – are often enough to get individuals into an innovative mindset. With a mission ahead and some fun involved, you can occasionally get an employee to silently ask themselves “Am I really getting paid for this?”

Where it can get tricky is in teams. Employees flying solo are not innovative enough for real corporate-scale innovation. In Silicon Valley, where the best idea wins, having more than one idea and one set of eyeballs on a project is essential. The tricky bit is that people are, well, people. They don’t always like the other person or the other person’s ideas. They may see teammates as threats (a negative) or their ideas as uninteresting (another negative). But the synergy of teams in innovation cycles is indisputable. When a group of people are excited about a mission and set aside egos, the synergistic effects are astounding. You will see a shift from “my way or the highway” to “let’s reason together.”

You will know it is working when A leads to B which then leads to Z. Often in innovation teams, a person will throw-out an idea. They are likely looking outside of the box but only seeing one external edge of that box. The next person, who had been doing the same but looking at yet another edge outside the box, will have an A+B epiphany. Once they say it aloud (which is often the hardest behavior to pull from an employee) everyone else at the table will perk-up and start animatedly talking about all the possibilities, using A+B as their starting point. Soon after, a solution so new and unique to change entire markets is sketched-out and ready for serious work.

Trust in the team and the reduction of egos is important. Take our timid employee mentioned above, the one who was looking at Edge-B. If they felt negatives from the team, they would not speak-up. It (If) they doubted they would be taken seriously, they would remain quiet. Contrarywise, if everyone on the team is upbeat, inquisitive, asks questions, is never dismissive … then everyone on the team can and will be open, participative and add to the team’s innovation cyclone.

Not everyone is driven by accomplishment. A lot of folks are using mission success as their measure of self. But everyone likes to have fun. One of your jobs is to make the innovation process enjoyable. This keeps the entire team motivated as they face the inevitable setbacks and delays that every project encounters.

Eliminate the negative, accentuate the positive, facilitate synergy and have a great time doing it. Hard to keep innovation from exploding out from such teams.