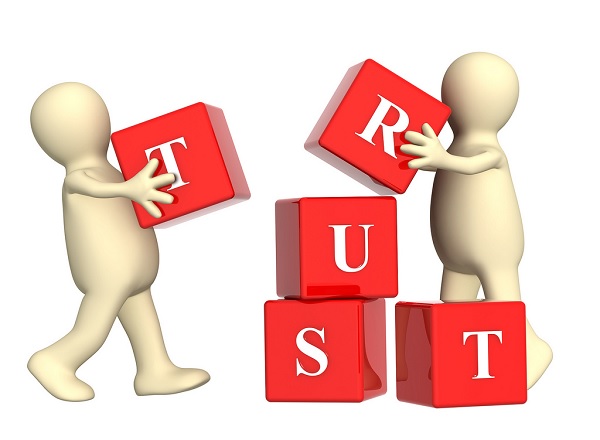 What is trust and why does management lose it? Ray Zinn, the longest serving CEO in Silicon Valley, discusses the nature of trust and how it must be the core any any good organization.

Guy Smith: My name is Guy Smith, I’m your guest host on the Tough Things First podcast and as always, we’re sitting down with Ray Zinn, the longest serving CEO in all of Silicon Valley and good morning to you Ray.

Ray Zinn: Well thanks Guy, so happy to be here with you today.

Guy Smith: Yeah always a pleasure to be with you. So I have a question on the table today and it kind of came from one of your listeners but we want to talk about trust. Trust, especially in today’s society, seems to be somewhat fragile. So what I want to talk about is trust with inside of an organization. Why is trust important between employees and looked at from a different scope; Why is it essential between employees and their management?

Ray Zinn: Well first off, trust is that bond that you have with an individual where you absolutely rely on what they do and what they say. So that relationship you might have with your spouse or you might have with your lawyer or your accountant. You have to believe or really accept the fact that their going to work in your best interest. So whenever you think of being trustworthy or having that trust, it is having that belief that they’re going to have your back, they’re going to support you. What I’ve seen happen in companies is they set up these silos and that silo is they have their departmental group and they even watch when we have corporate meetings or company meetings, they tend to sit together in groups. So I see these silos as they sit together and they talk among themselves but they don’t talk across the table to another silo or another group. So there’s that lack of trust there. So I try to mix it up a little bit by having them not sit with their own group but sit with a group that they may interface with or they may not know so that they can get to know one another.

I think trust comes when you really get to know the person head to toe. That you can feel open and safe discussing secrets and personal feelings about something. I like to think of trust as being the hallmark of honesty and integrity and when you have that kind of relationship within your company where trust supersedes everything else and people don’t worry about their back. They’re not concerned about, is someone talking about me wrong? Or is somebody trying to do something that’s going to be harmful to me and my family? So everybody works hard, they don’t worry about the silos or the differences between departments.

Guy Smith: Yeah transparency does breed trust and I guess that’s an explanation as to why we don’t trust politicians very much. Is trust …

Ray Zinn: Well, that’s a different … One quick thing about … Because, that’s why we don’t trust politicians and the reason, that I think, and what you’re seeing happening now is the fact that they don’t do what they say they’re going to do. So there is no trust. That’s the thing I mentioned a few minutes ago is that trust comes from, you know, you walk the talk, you say if I’m going to be here and I’m going to do that, that you can make bank on it, that you’re going to go book on it, you’re going to do it. I think this last of trust with the politicians is that they say one thing but they do something else.

Guy Smith: Right and that goes to that age old joke about when you know a politician is lying, is when his lips are moving. So, are human beings trustful or distrustful by nature, do you think?

Ray Zinn: I think they’re trusting by nature. I believe that all people are good. Some are a little better than others but I think all people want to be trusting, anyway. Whether they’re not trustworthy or they don’t have that trust is really when they begin thinking more about themselves than they do about others. I tell my employees, if you worry about you, I won’t. So that’s been one of my standard statements to my people, so, if they’re worrying about themselves then they’re going to be less trusting. So if they’re worrying about others, if they are honestly thinking about the company and how do I help the company become better as opposed to what’s in it for me, that’s the kind of employees I want.

Guy Smith: That’s interesting. So in other words, when you create a culture where you encourage people to actually be looking out for other employees and the mission of the company, it kind of takes the veil off, it creates instant transparency and almost instant trust.

Ray Zinn: Do unto others as you would have them to unto you.

Guy Smith: Yeah. So what kind of dumb things have managers done in the past that really just trashed trust with inside of a company?

Guy Smith: Lets talk about customers for a second, ’cause I find this interesting. I’m a big fan of Fred Smith and you know, his philosophy about everybody exists to support the customer. The employees, the front line employees, everybody from the receptionist to tech support to sales, blah, blah, blah. They all touch the customer. What can employees do to increase the trust that customers have in the company as a whole?

Guy Smith: Mm-hmm (affirmative). Well that makes a lot of sense because an employee who isn’t trusted, who isn’t loved so-to-speak with inside the company is not going to extend that same thing out to the customers themselves.

Guy Smith: So aside from the transparency angle, what can a leader, what can a manager or an executive do to instill a culture of trust with inside of an organization.

Ray Zinn: By the way he talks. If he uses good language and not condescending or foul, vulgar language. If his office is organized and clean, if he comes to work on time and doesn’t goof off, if he doesn’t take long lunch hours, if he leaves at a reasonable time at night and if he is praising to his employees. If he expresses gratitude toward them, then they’re more likely to do the same. So, monkey see monkey do. In other words you’re going to follow what your leader does.

Guy Smith: Interesting point. Well, trust is fundamental, I mean we simply cannot get along as a species, we can not move society forward without trust, so building trust with inside of your organization is the key to your organization being healthy and successful. If you want more lessons on what it takes for an executive or a leader to build these kind of cultures of trust and mutual support, get Ray’s book, Tough Things First, it really is a tour de force about what it takes to build an effective company, to be an effective leader, and really just to live a better life. So tune in again next week for another episode of the Tough Things First podcast and before you do that, go to ToughThingsFirst.com, click on the social links, make sure you connect with Ray directly.