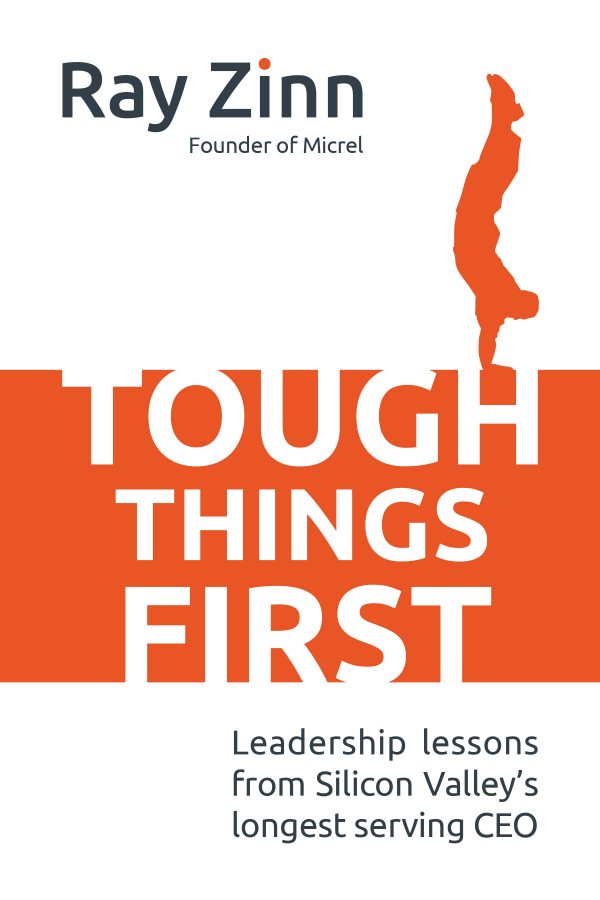 Any challenge you face that can take years, with hours upon hours of thought and work, can seem like an insurmountable challenge. In his latest podcast, Ray Zinn talks about writing books, and how met the challenges by doing the Tough Things First.

Rob Artigo: I’m Rob Artigo, back again, your guest host for another edition of Tough Things First, with Ray Zinn. I’m a writer and entrepreneur. Being invited back is always a pleasure, Ray.

Ray Zinn: It’s always, good to have you, Rob. You’re always so energetic and enthusiastic.

Rob Artigo: Congratulations on the new book, The Zen of Zinn.

Rob Artigo: In short, I don’t want to say Reader’s Digest version, but here briefly, a little bit about what the readers will get where they pick up a copy of The Zen of Zinn.

Ray Zinn: The Zen of Zinn is a collection of thoughts that I have written over the years, going back to when I started my coral. I just would have these thoughts, these motivational thoughts that I would give my staff and the operations people, just food for thought as they say, you know, Chicken Soup For The Soul. That’s what the compilation is, these little snippets, very short little blurbs on many, many, many subjects. That’s what The Zen Of Zinn’s about.

Rob Artigo: And it’s a great title, too. We could actually spend the whole podcast talking about the book, but let’s talk about just how hard it is to finish a project like a book. You’ve done two books now. I recently completed a book myself. It’s set to go to press in the next few months. I think I turned in a manuscript of 90,000 words. Ultimately the book’s going to be about 80,000 words, hundreds of pages, hours of research and interviews. I mean, it all goes together, but it all starts with an idea before it finishes in print.

There’s months and sometimes years that go in between, for the whole process, so let’s use writing a book as a metaphor for starting and finishing something you know is going to be hard and take a long time, sometimes unforeseen amounts of very hard work. What did you think about the challenge going in?

Ray Zinn: Writing is like doing an invention. It begins with a thought, in other words, an idea, “Okay, here’s the problem I want to solve.” Maybe it’s something you just come across and said, “Gee whiz, we need this or that.” You know, that product, whether it be a Scrub Daddy or whatever it is, an idea came to you.

So what you do is you sit down and you just put down these little ideas as little thoughts, and you keep track of them. That’s what I did, is I would sit down, and when these thoughts came to mind, I would write them down, whether it be just before I went to bed, whether it be when I got up in the morning. Oftentimes it would be in a meeting that I was having with one of my employees or with a vendor or a customer or a friend. They’d say something that would give me an idea. “Ah ha.” Then I’d jot it down.

So, writing is nothing more than a compilation of thought, and so whether you’re writing a story, a novel or whatever it is you have to have an end in mind. In other words, what am I trying to accomplish? When the reader closes the book, what will he remember? That’s the whole concept of writing. It’s similar to doing anything, whether you’re redesigning your home or whether you’re helping your children, it all begins with thought. As long as that thought has value, write it down. You’ll be surprised at how good of a writer you really are, if you just let these creative juices of yours flow, and you have to document them.

Ray Zinn: Well, intimidation is maybe a little harsh. You know, I have a philosophy. I hope for the best, but expect the worst. In other words, I get prepared. I prepare myself. If you prepare yourself, you can expect better things. So, before I start writing or doing it, whether I do a podcast with you or anyone else, no matter what it is I do, I’m trying to find a new job or create some music, art, whatever it is, I get prepared. In other words, I prepare myself first.

I don’t just start putting my pen to the paper and just start scribbling. I actually think about what it is I’m going to do, whether it be music, whether it be writing, whether it be designing, it all begins with a thought. What makes some better thinkers than others is that they can get deep into their mind, and they can let these juices flow in their mind, such that just great stuff comes out of it. Whether they’re a Mozart or Beethoven, whether they’re a great writer or a great inventor, like Alexander Graham Bell, if you’re good about coming up with ideas, and your thought process is an idea thought process, then you’ll, you’ll succeed.

I’m an inventor. I mean, I’ve got over 20 patents, and I just love to think of ideas and create products. Another thing that I do is that, if something is broken in my home or at work or whatever, I’m going to fix that, even though I could probably pay less by going out and buying it, I want to fix it. Not because I want to prove that I can do it, it’s just I want to get my mind thinking about, is there a way to repair this? So, that’s what I do.

Rob Artigo: Were there any big surprises along the way, say with Tough Things First, where you were working on it and you thought, “Oh wow, I didn’t expect this part to be …”. You know, I mean, I think for me going through and taking the editors corrections or advice or direction, and trying to make something clear, like having to write something again, because maybe the order wasn’t correct and it didn’t make as much sense, it didn’t make as much sense to the editor as it did to me at the time when I wrote it, and maybe something needs to be clarified. Were there any surprises for you along the way?

Ray Zinn: Again, I told you in this podcast that I hope for the best and expect the worst. If you expect the worst, then you’re prepared. So, you think it through before you turn it over to the publisher. You’ll minimize the problems you’re going to have. So when McGraw Hill published Tough Things First, supposedly, as this is the way I understand it, is that they could find nothing to change. They said, “Leave it as is.” Now what we did is, we thought it through first before we just put it out to them to approve, and so were we were expecting the worst.

Now you can overly think it, and then I don’t want you to do that. I mean, the overthinking it means you get paralysis by analysis so don’t go that far, but be willing to accept criticism. Be willing to accept changes, and if it changes the way you believe or what you think, then don’t. Leave it as it is. Don’t forget you’re the creator, and they’re not. They’re just giving you their input. So, take it as input, but you don’t necessarily have to change it, just because they’re telling you this is what they think.

Rob Artigo: One of the most common questions for writers is the ubiquitous question of, where do you get your ideas? Oftentimes, my response is, “Write about what you know.” Whatever profession you’re in, if you’re a hairdresser or a doctor or a philanthropist, whatever it happens to be, write about what you know, and you naturally, instinctively went right towards your areas of expertise when you wrote Tough Things First. Of course, Zen Of Zinn is filled with those experiences that you learned over your lifetime. So, I think it’s a great example of, where do you start? Well, you start with what you know.

Ray Zinn: As they say, begin, the rest is easy. I like to challenge myself. Id there’s, something that somebody says, “Well,  you can’t do that,” or “You shouldn’t be able to do that,” I’ll go ahead and do it, because somebody said I couldn’t do it. When I was in high school, I was told that I was too short to run the hurdles. So I said, “I’m going to run the hurdles,” just because I wanted to prove that it could be done, even if I wasn’t physically capable of doing it.

So don’t let anybody tell you, “You can’t do it.” The only one that can tell you that as yourself. If you’re telling yourself, you can’t do it, guess what? You won’t.

Rob Artigo: All right, we’ll close this session here after this question. After Tough Things First, how long did it take for you to decide that you wanted to do another book?

Ray Zinn: No, we decided, I should say I decided to do the book before I even started Tough Things First. We actually have in mind another couple of books. In fact, I’m working on my third book right now. You have to have a goal. You say, “Okay, if you want to run a marathon, you have to run 26 point two miles.” You can’t say, “Well, I’m going to run a marathon,” and run 10. So you have to have a goal in mind.

How many books do I want to write? Well, I wanted to write, okay? I got to have them done, and so I’m working on the third one. I could say five or 10, you know, but to me, three was a good number.

Rob Artigo: Everything after that will be a bonus.

Rob Artigo: Yeah, and the time it takes to write a book is significant, oftentimes. We were talking about it in context, with beginning something that you know is going to be difficult and take a long time. Sometimes people don’t imagine how long something will take, if they want to see it come to fruition. A book is a great way. If you complete a book, whether it gets published or not, if you complete a project like that, then I think you’re doing something for your self-esteem and your awareness of what you’re capable of doing.

It’s pretty fantastic to see somebody who’s completed a book, let alone two and now you’re working on three. I congratulate you on all those.

Rob Artigo: Great podcast, Tough Things First. Join the conversation at toughthingsfirst.com. Your questions and comments are always welcome. Follow Ray Zinn at Twitter, Facebook and LinkedIn. Again, we were talking about the books here, Tough Things First and also The Zen Of Zinn, and you can get those at Amazon, probably the most convenient way to pick those books up.

Ray Zinn: Thanks, Rob. I always enjoy doing this podcast with you.