Being Best When You Aren’t Feeling It 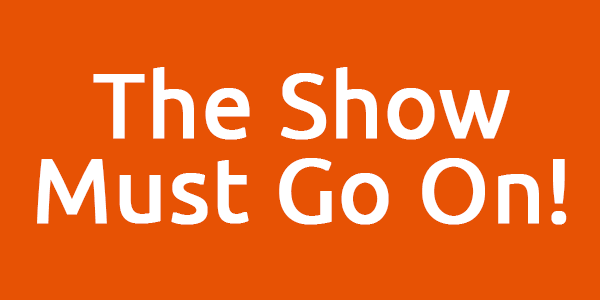 It can sometimes be painfully obvious we’re not physically or mentally up to a task, but what happens when we turn the situation into an opportunity to challenge ourselves?

Ray Zinn tells us in this Tough Things First Podcast that we can learn surprising things about ourselves with the attitude that “the show must go on.”

Rob Artigo: Rob Artigo here. Your guest host for another edition of The Tough Things First podcast with Ray Zinn. I’m a writer and entrepreneur in California. Being invited back always a pleasure. Ray, how you doing?

Ray Zinn: Oh, it’s always enjoyable to do these with you, Rob. Doing great.

Rob Artigo: And I appreciate it too. And I know you have some appreciation for the theater and I know you’ve probably heard the saying, the show must go on. And of course, that’s a reference to a stage acting reference. Basically, the show depends on ticket sales. The audience must get the show that they came for. If the star or the key players can’t perform because of illness or something else, the show loses money and it fails. So then becomes the saying, the show must go on. So we know that life can be that way. And business is often that way. The show must go on. And I’m not saying you work when you got the flu and 102 degree temperature or something like that. You stay home and take care of your health, that’s good.

And hopefully you have a plan for having people pick up the Slack when you’re not around, but I’m talking about, when you are at work, when you are available to do the job, how do you perform at your best when you aren’t feeling your best? I mean, when you feel wrecked and tired and you still have to put up the the performance in the work, the standards that you live by. They say, “I feel like a million bucks.” Let’s say you feel like 52.95 and you have to perform like a million bucks. How do we do that in the work environment?

Ray Zinn: Well, it goes to the saying also, when the going gets tough, the tough get going. And so I know you’re not referring only to the people with 102 degree temperature that are still performing their particular show because there are people who do that. I mean, you hear about this all the time that somebody who had pneumonia or somebody who had some terrific illness or cancer. Look at Rush Limbaugh. I mean, he’s continued to do his daily podcast.

Rob Artigo: I thought about when I was writing the intro to this subject was I thought about the fact that many years ago, I heard Rush say on the air, he goes, “Well, I don’t always feel like I want to be here, but when the mic goes on, I present the show and I do the same performance, no matter what.”

Ray Zinn: Yeah, well, and he recently was diagnosed with lung cancer in a very advanced stage. And yet he sounds just as normal as he ever does. He’s not letting it get him down. And we’re all going to face that. There may be an emotional issue, maybe a family problem, maybe a marital problem. It could be a financial problem. It could be a health issue, so many things that can really knock us down. And so we just have to understand that when the cycle of life turns against us, when we feel at our lowest, that’s when we actually need to perform our best, because you need to come out of that doldrum, you need to come out of that cycle. And we know that our attitude really affects our health, really affects in the way in which we perform.

I mean, really our physical health is affected by that. The more upbeat you are, the more positive you are, the more able you are to overcome some physical ailments and maybe not all of it, but many physical ailments can be overcome by our attitudes. So, it’s our attitude that defines our best. If not your best, why not your best? You want to get that ambience about you, that no matter what is going on, you’re going to be your best, you’re going to do your best. And we know what happens in sports. We see it all the time. You’re not feeling particularly great, maybe you’ve got an injury, or maybe you got a cold or some other ailment, and yet you still got to perform. You still got to play the game.

And you’re not always going to be able to schedule your best, healthier, your best environment on the basis of how well you feel. I would definitely say that in my 50 years of experience in business, that most of the time, things are going to happen when I’m not feeling good. And I have to be able to deal with them in a very cognitive and professional way. How do you do that? How do you become, how do you do your best when you’re not feeling your best? And so what you have to do is just compartmentalize the problem. Say, “Why am I not feeling good? What is my issue today?”

You can compartmentalize it. Maybe you set it aside. If it’s a headache, you go take a couple of Advil or something, or if it’s some other emotional problem, like you just left the house in a huff with your family or your wife and you get to work. And you’re trying to get that horrible project that you’re facing done and done properly. You have to compartmentalize, you’ve got to separate out the problem you had at home so you can start that project. And I know it’s not easy to do because it’s going to be on your mind. So how do you do your best when you don’t feel your best? Compartmentalize. You just got to set it aside, recognize the problem, and then move forward to, as you say, the show must go on. And so don’t let the issue that’s causing you to not feel well become the overriding issue that will affect your job performance.

Rob Artigo: Have you ever had a situation in your life where you weren’t feeling a hundred percent and you had to perform at a hundred percent, and then when you were done, you realized that the nature of the problem that you had contributed to maybe some of your best work?

Ray Zinn: Well, yeah. I mean, you can think about some people who are going through a difficult time. We talked about Rush Limbaugh a minute ago. I think right now he’s doing better than he does when he didn’t know he had cancer. And so we tend to try to overshadow our problem by giving it our all. In other words, what they call a counter irritant. As they say, your counter irritant means you’re going to do better to overcome that thing that’s bothering you. And so I’m sure you’ve bit your finger, your knuckle or something at sometime when you’re suffering some pain and that’s called a counter irritant. So, I think some of the best work is done when we’re not at our best. This Stephen Hawking who was physically, he was not able to do almost anything.

Ray Zinn: And yet some of the greatest achievements in science were done by Stephen Hawking. And so, I have a friend who’s blind, he’s been blind… It was an accident that happened when he was 15 years old. He graduated [inaudible 00:08:36] from Stanford in law, and he runs a successful law practice in Los Angeles. And he’s totally blind, and he’s one of the best lawyers in the area. You don’t have to let something like him losing, he lost his eyesight to an accident, let that ruin your life. As I said, he’s one of the best lawyers in the area. Sometimes a physical ailment can actually be to our advantage. When I lost my vision, became legally blind in 1994, I actually, I thought I did a better job running the company than I did when I was fully sighted.

Rob Artigo: I think there are lots of examples that are like that people compensating… To me, sometimes that whatever that challenge is, it gets you out of yourself instead of thinking in your head and being part… Suddenly you find yourself focused more on the task at hand, rather than on maybe some emotional baggage or things in your head, or just being too overly self indulgent, you’re suddenly letting your real creativity flow.

Ray Zinn: Exactly. That’s what it does. I mean, we tend to compensate. If you’re hard of hearing, you’ll just listen more carefully and so listening more carefully can be an advantage. And not that you’re trying to be thoughtful in listening more carefully, you just can’t hear. So you tend to focus in on almost every word that that person is speaking. You’re almost reading their lips, or if you’re not fully sighted, you got some vision issues like I do, you tend to store the information better. You tend to remember it better. Because now you have to rely more on your memory, which will help you out later on in life. Maybe you won’t get dementia. So sometimes a disadvantage, like my case, this handicap that I had, this vision problem, actually became a strength because it has enhanced my memory. We let one thing strengthen us in another area because we want that strength to overcome that weakness. And so, I mean, I can name many, many, many, many examples of how this has been the case.

Rob Artigo: I guess if there’s a moral of the story here in our particular podcast is this edition of Tough Things First, it’s that just because you’re facing a challenge, doesn’t mean it won’t be, is somehow or another an advantage. Somehow, it doesn’t have to be the end of what you’re doing, it can be the beginning.

Rob Artigo: Well, Ray, thanks again for another great conversation for Tough Things First. I want to let the listeners know they can join the conversation at toughthingsfirst.com. They can send in questions there, any comments they might have, you can direct questions to Ray, can even tell him what kind of podcast topics you’d like to hear on Tough Things First and he’ll make sure that it gets incorporated into the great conversations we have here. Also follow Ray on Twitter and Facebook and LinkedIn. Thanks again, Ray.

Ray Zinn: Rob, it’s always good to be with you. I hope we get to do another one of these soon.