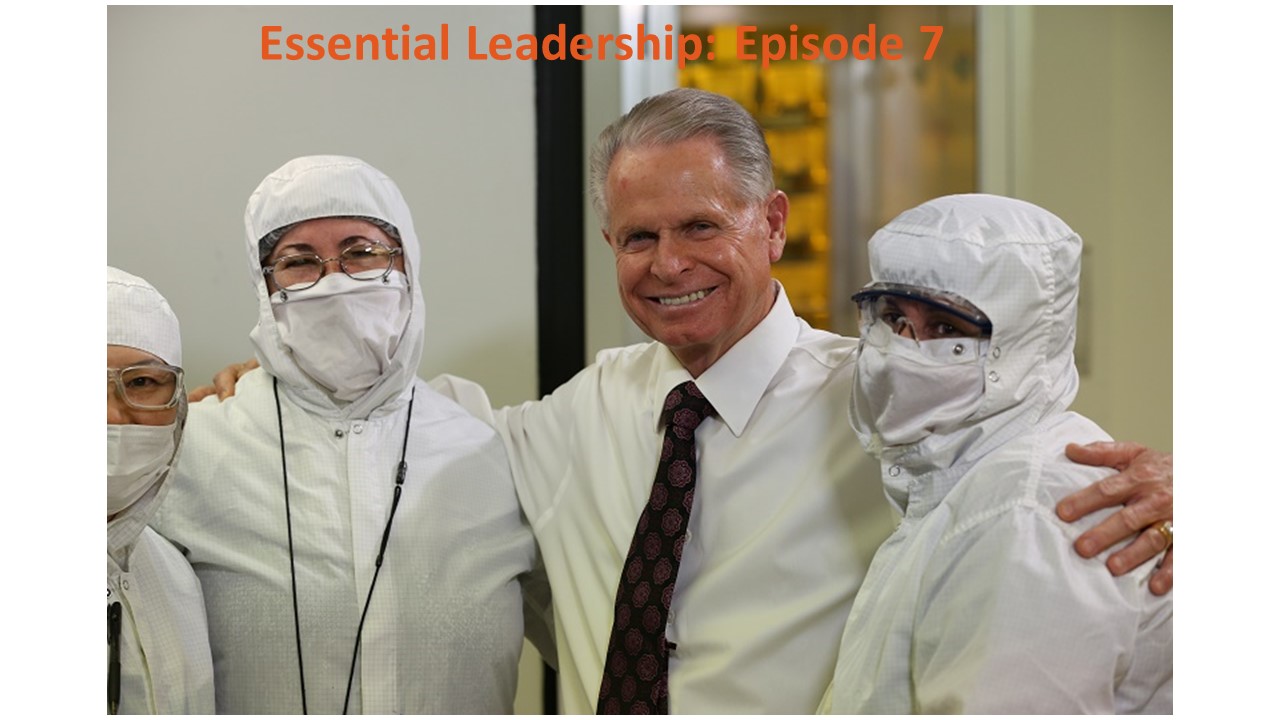 These words sound the same, but a leader needs to know the difference.

In Episode 7 of our special series on Essential Leadership, Ray Zinn discusses the entrepreneurial skill of valuing the difference between “ministering” and “administering.”

Rob Artigo:   That proverbial arm on the shoulder kind of thing? Administering, the supervision or managing of a task or function, but you also say the trick is to combine administering and ministering to get the best results?

Ray Zinn:       Yes, because they do work together, it’s just that they work differently. So, you are going to have to watch the numbers, make sure you dot the i’s and cross the t’s and do all those things which are, from a functional point of view, running the business. But really, the best leaders are the ministers, the ones that are caring, motivating, uplifting, guiding, directing, they’re showing love.

Rob Artigo:   You also in this particular area that you were writing about, you say, “If we can do that…”, if we can combine those, get that result, “supervise and manage in a loving, caring way”. And you say, “Just think about how wonderful our workplaces, our home, our communities would be”. So, talk a little bit about how that successful combination of ministering and administering can improve the world around us, whether it be at worker or at home.

Ray Zinn:       Well, when we just look at the numbers you focus on, just as you would, the dotting the i’s and crossing the t’s, all the legal mumble jumble, and the, “Am I making money this quarter?”, and so forth. It becomes very dog eat dog and hard. And as they say, “You’re just dealing with the hard facts”. Whereas, if you can combine that with love, compassion and showing concern, because 75% of the people who leave a company and look for other employment is because they have a difficulty with their supervisor and not because of the numbers or the facts, it’s just because the relationship suffers. And so, if you can have a great relationship… As they say, “There’s no I in team”, if you have a great relationship with your people, then your numbers will look good. So, I say that the focus on ministering and administering will just kind of come along.

Rob Artigo:   Well, take that outside the business place and think about the community, when we have to cooperate with people and in certain situations in the world we are, in an essence, acting with a certain role of leadership, and in other ways, we’re acting in certain role as followers. But we have to continue to have that mindset, right? It’s a way of life, it’s not really just a attribute of essential leadership.

Ray Zinn:       Well, you know what I tell the people when I hire someone? I say, “I’m not here to make you rich, that’s your job. You’re here to make yourself rich”. That’s , as you would, the administering. But I said, “What I’m going to help you do is, I’m going to help you become a better person, father, mother, husband, wife, a better citizen. That’s what I’m going to do”. And I said, “How much is that worth?”, and so, that’s a very telling difference, that’s the ministering part. So, you can see that when I hire somebody, I don’t talk about administer, I don’t talk about making them rich, I talk about helping them become a better person.

So, if you look at your relationship with your neighbors, friends or your associates and you’re really focusing on helping them become better people, and in an honest sense, not just trying to set them straight as you would. But if you’re trying to help them become better people, and maybe by your example, your caring, the way you interact with them, that’s where we’re going to get along better.

Rob Artigo:   Well, when we were doing these podcasts up to this point, we have discussed various attributes of Essential Leadership, but we didn’t put them in any particular order, and we’re not making a formal ranking here, but I do want to ask you where this particular aspect, managing in a loving and caring way, where does that rank in your successful leadership scale?

Ray Zinn:       Well, it’s certainly in the top three. Certainly, you have to know what you’re doing, you’ve got to have that ability yourself to do the tough things first. And so, your habits… As they say this, “The habits of a successful CEO, if you have those good habits, you’re healthy, you’re taking care of yourself, taking care of your family, those are of course number one. If you don’t take care of yourself, you’re not going to take care of anybody else. So, you got to have the right health, the right attitude”, and so that’s very important. And as I said, “Learning to do the tough things first, loving the things you hate, as you would”. And then, certainly third is having that ministering perspective, as opposed to just administering is very important.

Rob Artigo:   I heard a story from somebody the other day, he was talking about how he had to transform the way he behaved at work. Because he would go to work grumpy, sit behind a desk and bark orders at people. What he found was that he was just a grumpy dislikable person. And you mentioned the fact that, people who leave companies one of the most be frequent reasons is that they have decided that they just do not like the supervisor, they can’t get along with them. And this guy discovered something about himself and decided that, “Hey, I can’t show at work doing this, I can’t behave this way. Because I’m cutting off my ability to really communicate and even listen to the people around me”.

Rob Artigo:   So, you can look at your staffing report and find out how many people you’re losing, as to whether or not… the indicators that you’re failing. There are probably some indicators there, but if I’m one of those people… And with recalling this guy’s story, about sitting behind the desk and just barking orders, is that it took a while for him to figure out that he needed to look at himself in the mirror and listen to what he was saying to people and figure out that there was a problem with what he was doing. And so, in your experience in leadership, did you find ways that you could help people see these weaknesses or behavioral aspects that contribute to failing communication with people along the lines of what we’ve been discussing here?

Ray Zinn:       Yes. I mean, you’ve been in the military, you served in the military police actually. When you start out you go to bootcamp and you have the drill instructor and he’s very annoying. He’s not there to make friends, he wants you to learn discipline, he’s there to break you down and change you into what the army or what the military wants. So, that’s the kind of boss you don’t want to be. I mean, you can still have administering discipline and teach people correct principles without having to bark at them like a drill sergeant, it’s condescending. You remember bootcamp I’m sure, and you know it’s condescending. I mean, they’re trying to break you down. You don’t want to break your employees down, you want them to love you. They want them to respect you.

And again, Rob, I don’t remember if you loved your drill instructor or not, or your bootcamp leader, but I’ve talked to many people who served in the military and I don’t remember any of them say they love bootcamp.

Rob Artigo:   Well, Ray, you know the fanatic codes, and how in the military you repeat numbers. So, instead of saying nine on the radio, you would say niner.

Rob Artigo:   I was going through station training and basic training, and I had my senior drill instructor… Like, I was nervous, he was standing there right up next to me, hat brim almost touching my face as I was calling out the radio signal, “Seven, eight, niner”, and I wasn’t saying, “Niner”, I was saying, “Nine”, and he kicked me in the ankle. And then I did it again, I tried to figure out what I was doing wrong and I said, “Nine”, again and he kicked me in the ankle. It was like three times before I realized I should have been saying, “Niner”. Now, it wasn’t painful, but it was startling. Anybody with rank when I was a Private E-1 in basic training scared the heck out of me.

And so, for the senior drill instructor who was an E-7 Sergeant with three stripes up and two rockers down, that scared me. And then kicking me in the ankle, that was it. So, obviously we don’t see people kicking each other in the ankle a lot in workplaces, but there is a way to metaphorically kick people in the ankle when they’re making mistakes. Instead of just explaining something to somebody, you could kick them in the ankle over and over again without really telling them what they’re doing wrong. Obviously that’s an example of failing to manage in a loving and caring way, correct?

Ray Zinn:       Exactly. So again, you don’t want to correct them or break them right then, you may want to wait until the time’s appropriate and say, “Now, let me talk to you about this”, and then do it in a loving, carrying away as opposed to beat him over the head, kicking him in the ankle, shouting at him or swearing at him right then and there. People do not like to be berated. Now, in the military, I guess you do expect to be berated at times, but it’s not fun. No one would ever say that the military is a loving, caring place to work. And you’re laughing. So again, the difference between administering and ministering is the relationship.

Rob Artigo:   Well, that’s some good advice and we’ll continue this conversation in the next episode, here in this series. Join us next time as we continue the conversation on essential leadership, a special series of the Tough Things First podcast. Next time on episode eight, we’ll discuss building trust. So, remember to join the conversation at toughthingsfirst.com, your questions and comments welcome here, and follow Ray Zinn on Twitter, Facebook and LinkedIn, then of course get Ray’s books, Tough Things First book, the Zen of Zen, the Zen of Zen two, and I hear the rumor is Zen of Zen three.

Rob Artigo:   All right. We’ll see you next time, right? Thank you.