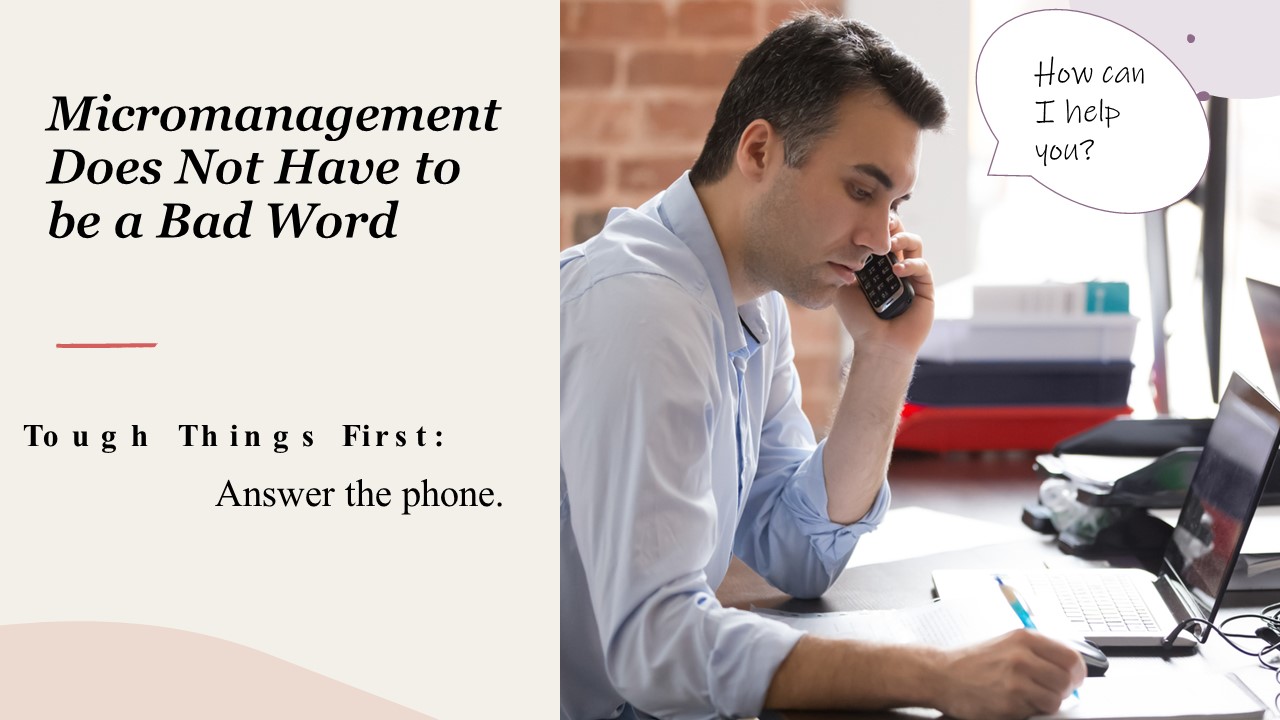 Micromanagement. Does it get a bad rap? As head of Micrel Semiconductor for 37 years, Ray Zinn took a taboo management style and turned it on its head. The results were nothing short of amazing. In this Tough Things First Podcast, Ray breaks down the reasons that putting a positive spin on micromanagement can transform workplace culture.

Rob Artigo: I’m well. And so don’t micromanage me too much on this podcast, but please, let’s talk about micromanagement. I’ve talked to people who worked for you at Micrel over those many 37 years, and some of them were in senior management, and I’ve been told that your own philosophy regarding micromanagement was to encourage your managers to do a little bit of it and make it a positive thing. Tell me about when you have such a negative connotation for micromanagement across the business world and you take a different tact as usual.

Ray Zinn: So let’s talk about what micromanaging is. So micromanaging of course, is we step back and you don’t do anything. You’re not involved at all. You’re just looking at them, signing their paycheck, or you’re not involved in their work. People like to know that you’re interested. In fact, I was talking with a fellow here not too long ago, has his own company. And of course with this call that you can see who’s calling you, he looks and sees who it is, and if it’s one of his employees, he just puts it right to voicemail. And I asked him, “Well, why do you do that Joe?” And he says, “Well, because I want them to be able to do the job on their own. I don’t want to always solve their problems.”

How’s it going? How’d it go on that project? They like to know that the boss thinks that they’re doing something worthwhile.” And so he started back to, he calls the micromanaging, answering the phone and he says, “I’ve never seen my people happier. They are so happy now when I answer the phone and I meet them on the job.? He says, “they’re delighted. They love to show me what they’re doing and how they’re doing it.” He says, “It didn’t dawn on me because I’d heard that micromanaging was such a terrible thing.” And I said, “Well now you learn Joe, that managing by involvement, and some people call it micromanaging is good. And so you want to be involved with them. It’s your company, it’s your project, and they want to know that you care about them, that you care about what they’re doing. So staying aloof, being a micromanager where you’re standing back, just throwing the meat to the lions as you would, is not going to make them happy.”

So now micromanaging, if you did it without a smile, if you had a frown on your face, that’s bad. I mean, if you’re just chewing them out, cussing them out, criticizing everything they do, that’s the bad kind of micromanaging that most people refer to where you’re constantly on their case, you’re constantly bugging them, you’re demanding this, you’re sending them all these [inaudible] emails and messages, that’s the kind of micromanaging that got the bad rap. But having a caring attitude where you’re showing love and appreciation for what they’re doing, thanking them for what they’re doing. I made it a habit of going around talking to my people. They call it managing by walking around. I did that. I went and asked them how their family is, how they’re doing, giving them encouragement. I love to talk about their family. I’ll even talk about how their kids are doing, how their spouse is doing, showing interest in them as a person. People love to talk about themselves and that’s the key. The key is keeping them interested in your company by keeping you interested in them.

Rob Artigo: There’s a huge difference between what you just described as being a positive and the kind of micromanaging where the person’s looking over your shoulder and looking at what you’re doing on your computer screen and pointing and going, I have a manager and he has a manager. And then you’re that guy’s manager and then here you are standing there pointing and saying all these different things. There’s layers of management there that can help out. But if you sit there, if you walk up to somebody and say, “Sorry, I don’t mean to interrupt you, but you want to tell me a little bit about what you are doing?” And they tell you and you go, “Hey look, you’re doing a good job.” Find out a little bit about them. That’s a whole different thing than sitting there and saying, “Well, you’re doing this wrong.” Even though he may not be the subject master on that particular subject, but you can see the difference there, right?

Ray Zinn: Well criticizing as you’re managing is micromanaging. Encouraging as you’re micromanaging is good. And so you have to switch it from being critical to being encouraging, to being developing, to be hopeful and helpful. I say, “How can I help you?” Go to them and say, “Hey, is there anything I can do to help you?” So that’s not a negative micromanaging that’s a positive. And keeping them well aware of your interest in them as a person, not just criticizing what they’re doing is a job. So anyway, that’s…

Rob Artigo: Yeah, I think caring about people too. I mean obviously I haven’t been around the world as you have in seeing what other companies have done and what the culture at other companies is like. But I would imagine that caring about the individual to a level like that where you were expressing that individual’s importance for the team and that you care for them is not necessarily something that in some cultures around the world where you have big companies where they put any of that stuff in practice, you may never see those top level executives except in some kind of stern picture of them pointing at you going, you better work, you better work, or we’re going to get rid of you kind of thing.

Ray Zinn: Well, there was a large telecom company in the Bay Area that the CEO who not did not have a family life, and he would spend almost all day and all night at the company. He would call meetings at two o’clock in the morning, two o’clock in the morning and demanded his staff be there because he was there. And to me, that’s punishment. That’s not micromanaging, that’s punishment. And of course he was ultimately fired, because people were leaving the company in droves. So you don’t want to make their work painful, you want to make it joyful. So you say, “Okay, I’m going to go see person so and so.” And as you’re talking to yourself and getting ready to go visit with them, you say, “Now, what can I do to encourage them? How can I make them feel better by my micromanaging than to feel terrible by my micromanaging?” So I’m not here to beat their head in, I’m here to help them lift them up. That which does not encourage is darkness, is evil. [inaudible].

Rob Artigo: Yeah, I’ve seen it in my own experience in working in the radio industry. And famously in the radio industry, you’ve had producers that would bark or yell at you when you did something wrong on the air or reporting or whatever. And I remember one particular manager who would practically foam at the mouth yelling and screaming at people, and there were some people that I worked with who were very talented and very skilled, never got one encouraging word from the guy. He was just very negative the whole time.

And he would yell and scream because he thought that doing that he could bring out the best in that person. And most of us, like I told him when I got hired there, I said, “I’ll stick around for five years.” Everybody knows that this is a way station to the next level. He knew that. Everybody knew that. But I said I’d stick around for five years. I was there for three because I couldn’t stand it anymore. It was so negative of an environment. I can see that in what you’re saying. And what you did was exactly the opposite of that and got the best out of people anyway.

Rob Artigo: Well. I’d like to tell the listeners who have enjoyed this conversation, there are more podcasts at toughthingsfirst.com. You could reach out to Ray with your questions there at toughthingsfirst.com and find more podcasts and other information links to Ray’s social media as well. This is a fast growing podcast, rated one of the top Silicon Valley podcasts. We’d like to keep that up. So make sure you go to your favorite podcast platform and you rate this podcast. Keep us out there. Keep us noticed. Ray’s podcast is an important venue for a lot of people and business leaders to share their thoughts, and we’d like to keep you here at Tough Things First podcast at The Tough Things First podcast. So please also, check out Ray’s books, The Zen of Zinn. One, two, and soon three. And of course the big book is Tough Things First. Thanks, Ray.