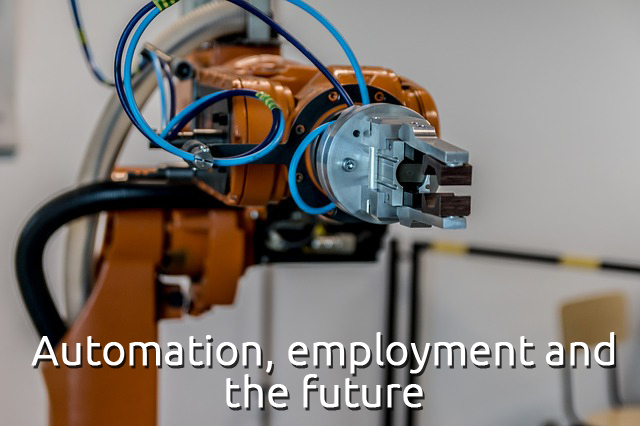 Automation isn’t going away. As the use of AI technology and robotics seize ground once firmly occupied by the working class, is there a point of diminishing returns? In this edition of the Tough Things First podcast, Ray Zinn answers questions about what the future holds.

Rob Artigo: Rob Artigo here again. Your guest host for this edition of the Tough Things First podcast. I’m a writer and investigator in California. Being invited back is always a pleasure, Ray.

Ray Zinn: Well good to be with you again, Rob. It’s always fun to have you on the program.

Rob Artigo: Is it speeding up? Are we seeing a quickening in that area?

Ray Zinn: Well I don’t know if it’s speeding up, per se. It’s certainly continued to accelerate. If I just look at my lifetime and what has come about, we’re having to deal with more and more things and then to do that we innovate and create things to help us do it, like the computer, for example. Personal computer, actually, has given us much more capability and allowed us to be more productive than we were in the past. So I mean, people worked longer hours as a farmer, my parents were in agriculture, they work long hours because there was so much they had to get done in a day, whether it be milking the cows or feeding the cows or raising the feed for them, all that had to be done in a timely way. And you couldn’t just say, “Well I just can’t do that.” And say I’ll just shorten my day so I can have more time to go off and have fun or be with the family. So, you know, the 18 hour days were not unusual in that time period. The farmers used to get up at like 4:00 in the morning and they didn’t retire until 8:00 or 9:00 or 10:00 at night. So I mean, they barely got in six or eight hours of sleep and there was no time, as you would, for doing the fun things like going to ball games or just enjoying an evening with your family.

I think the average worker today probably puts in eight hours, maybe not even that. Maybe seven and a half hours and that’s half the time that my parents and grandparents put in to provide a living for their families. So in order to get more done and have more free time, we’ve had to move to more automated capability, whether it be computers or some other form of artificial intelligence such as these robots now that will vacuum your house and clean your walls and mow your lawn. And we use automated sprinkler systems that sense everything, the moisture in the ground to the amount of sunshine required, the moving of the sun from here to there. And that, actually, has made it a lot easier and nicer for all of us.

So we all tend to try to … They say the shortest distance between two points is a straight line so we’re all trying to straighten the line out. So we’re all trying to get more time to do other things. And those other things, for example, if we didn’t have time to go watch a football game then the football industry would go down the tubes. So, you know, because we’ve had more free time has created more jobs, more opportunities for these recreational things, whether it be video games or whatever else, to allow us then to expand the economy even though individually we’re working fewer hours a day. Does that make sense, Rob?

Rob Artigo: It does. And the farm analogy makes a great deal of sense in the context of what we’re talking about here. What I wonder about is, as we transition to, I think you had mentioned once to me before we started the conversation, before we started recording, about the idea of a person flipping burgers versus the machine flipping burgers. Do we run into a situation where, I think I’ll hold onto the family farm idea for a second here and say machines come in and make it easier for those farmers to get things done but what happens when somebody buys the farm, it’s a corporation and there’s nobody working on it, it’s all machines? And do we have any moral obligation to make sure that people still have a value and they contribute and are able to earn a living?

Ray Zinn: Well you know, the water will seek it’s own level. So we’ll find ways to use our time, either in expanding our farm or if, in the case of the automatically flipping burgers, we will find other things for them to do. You know? So unemployment is at an all time low, as least as low as I can remember. And we did that by just increasing the economy. And so what happens is that depending upon the economic structure of the particular country, it’ll increase or decrease in it’s demand for labor. So if we’ve got a decent economy then there’ll be more demand for the product, whether it be flipping a burger by hand or flipping it with a machine. And so we’re trying to find ways to actually improve the economy not make it worse. And certainly if you made everybody unemployed because you do everything by a machine, then you’ve moved a little faster than you can absorb it. So what we want to do is balance it so that we don’t end up, through automation, putting more people out of work than we can employ. So we want to keep the employment high and not low.

And so there’s natural consequences when we do. We’re either going to pay for it through unemployment insurance or otherwise. So there is a balancing act that we have to do. Now in the thinner and thicker employment situations, thicker is when you have a lot of manufacturing people because that takes a lot more people than thinner, meaning if you were automating, whether it be the assembly of a vehicle or flipping a burger or whatever, the more automation you do the more efficient you can produce a particular product and even make it higher quality. And so the higher the quality then the more efficient you can do it is an advantage. And, presuming that you can still keep employment at the right level so that people can still provide for their families. But as I mentioned earlier, my grandparents and my father, but more so my grandparents, 12-14 hour days was norm. And now it’s more like seven to eight hours is norm.

Ray Zinn: So, you know, we were employing fewer people back in the 14 hour days than we do in the seven hour days. So there’s some trade-offs. You have to be able to improve the efficiency of what you’re doing and provide more free time. Now how much free time do we need? I don’t know that we need 12-14 hours of free time a day. I think there’s nothing wrong with a six to eight hour workday. Any more time off than that, I think idleness is the devil’s workshop, as they say. So too much idle time means that we’re going to be wasting time. And I think there’s a certain amount of time that we need just to be productive and do productive things rather than just having this free time, as they say.

Rob Artigo: It sounds, Ray, like you were talking about this natural balancing effect that occurs, I would imagine that since businesses are in the business of making money, companies often make products and sell those to the public. If they go out and create … If all the businesses are using robots to make their products and people aren’t employed, there’s nobody to buy the product. So that there, it just goes to exactly what you were just saying there.

Ray Zinn: It’s a balancing act. That’s what we … Obviously we don’t want to produce more than we can consume. And so there’s that supply/demand curve in economics that we all have to adhere to. So if you increase the supply and there’s not the demand for it then of course you’re going to be out of bounds economically so we … Water seeks it’s own level. And same thing with supply and demand. As demand increases then supply will increase. As demand drops off, supply will drop off. And so even if it’s machines that are doing the production, you’ll just put your machines down. In other words, you’ll just shut your machines off.

Rob Artigo: Well thank you again, Ray. Appreciate it. The listeners can definitely join the conversation at toughthingsfirst.com. There’s a wealth of information there. We can accept your questions and comments, they’re always welcome. And also if you’d like to pitch some ideas, ask some questions of Ray and we can get them on the podcast here we’ll definitely do that. Follow Ray Zinn on Twitter and on Facebook and on LinkedIn and of course, get the text. Ray’s book, Tough Things First, and of course, the new one, the Zinn of Zen. Thanks again, Ray.

Ray Zinn: Thanks, Rob. Appreciate being with you again.